So. There’s this contest. The Hit Like a Girl contest. 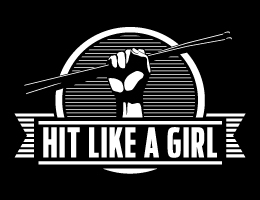 It’s for female drummers. Which seems awesome, right? It seems like something I should be rallying behind, ya? I’m struggling to get behind this contest though. I think the point of this whole deal is to increase the visibility of female drum set artists. Which is SO great. I understand, and appreciate, the empowerment of females (this is me here). But does a contest like this mean that others are not for females? Is this just supposed to call attention to how awesome it is to be a drummer..in general..or specifically being a girl drummer? I want to be excited about something like this, but I don’t think a contest (pageant culture, folks) exclusively for girl drummers is the answer. We’re not novelty.

The history of the HLAG contest:
“David Levine of TRX Cymbals conceived the Hit Like A Girl Contest in 2011. He felt that the music products industry was seriously underserving female drummers and he wanted to support and promote their development. He got together with Mindy Abovitz of Tom Tom Magazine, and Phil Hood and Andy Doerschuk at DRUM! Magazine, and the Hit Like A Girl Contest was born. Since then the contest has attracted 700 contestants from 42 countries. It has generated millions of page views and hundreds of thousands of fans votes around the world. And it has raised the visibility of female drummers and spotlighted the efforts of girls and women.”

Thoughts? Help? I may be having an existential crisis over here…